It is assumed that the UE has established a PDN connection to the IMS APN with the QCI value of its default EPS bearer set to ‘5’. The IMS registration signal goes through the default EPS bearer and gets inside the IMS core via the P-CSCF. The P-CSCF, I-CSCF and the S-CSCF consists the IMS core and they controls SIP signaling for VoLTE. The I-CSCF and the S-CSCF interworks with the HSS via Diameter Routing Agent (DRA) to retrieve subscriber’s profile, authentication vector, etc. At the front of the P-CSCF lies the Session Border Controller (SBC). The SBC provides a security function like IPSec, topology hiding, media controlling, etc. It can either be co-deployed with the P-CSCF or separated from the IMS Core.

NOTE the DRA between Diameter clients and Diameter servers (i.e., PCRF, HSS) is omitted in the diagram to clarify the reference points.

I. IMS Authentication and Key Agreement (AKA) during IMS registration 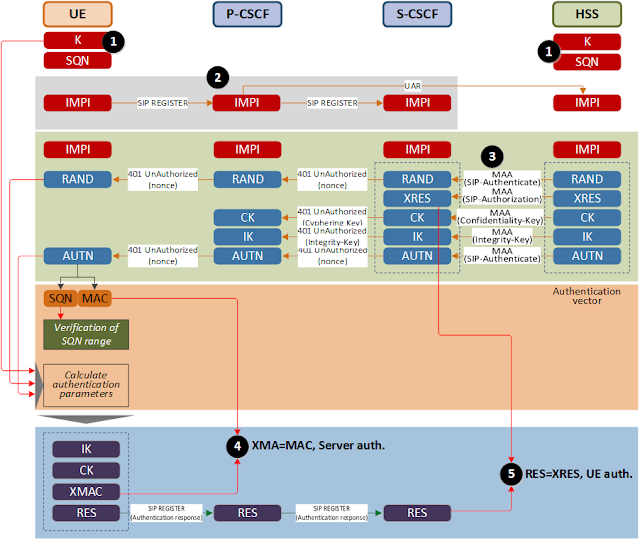 (1)   The secret-key K and the sequence number SQN are commonly stored in both server and client.
(2)   The UE sends the initial registration with the user identifier towards the IMS Core.
(3)   The S-CSCF (i.e., registrar) queries the HSS for the authentication vector of that subscriber. The HSS generates the random number RAND using the SQN. The HSS uses K, SQN and RAND parameters as input to the authentication algorithm and as a result, obtains a set of authentication parameters, i.e., the authentication vector (AV), as listed below:
The S-CSCF returns AV (i.e., RAND, AUTN, CK, IK) to the P-CSCF and the P-CSCF delivers RAND and AUTN in the response to the initial registration request (see the step#31 for the detail). XRES is stored in the S-CSCF for later use. The CK and IK is used for integrity and security check by the P-CSCF (or SBC).
(4)   The UE extracts MAC and SQN from the received AUTN. The UE verifies the range of SQN and uses AUTN, K and RAND as input to the authentication algorithm. The UE compares the resulting parameter, XMAC with the received MAC. As such, the UE authenticates the server.
(5)   The resulting RES is sent back to the server. The S-CSCF authenticates the client by comparing the received RES with the XRES.

In case it is a re-registration, the first transaction may not be necessary. The UE will include challenge parameters received in the previous registration procedure so the network is able to authenticate the UE as long as the challenge parameters are still valid. During the registration, the VoLTE client and the IMS network authenticate each other based on the agreed authentication algorithm and in the meantime, negotiate a security algorithm for IP layer transactions. 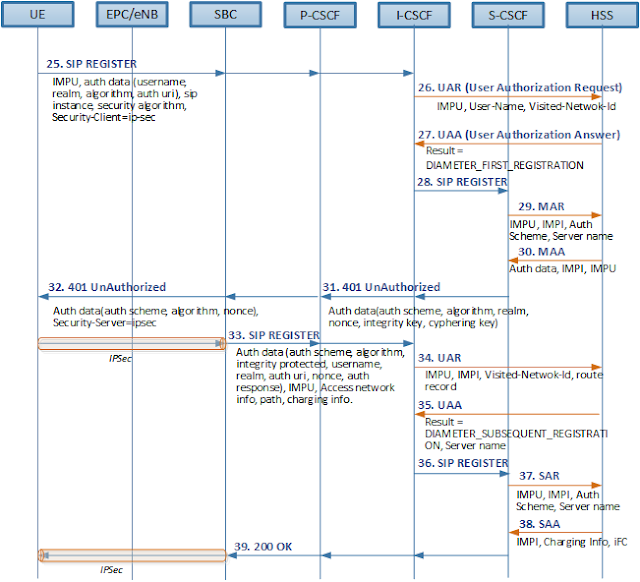 [25] The UE initiates the IMS registration by sending the SIP REGISTER towards the P-CSCF.
The following snapshot shows an example of SIP REGISTER. 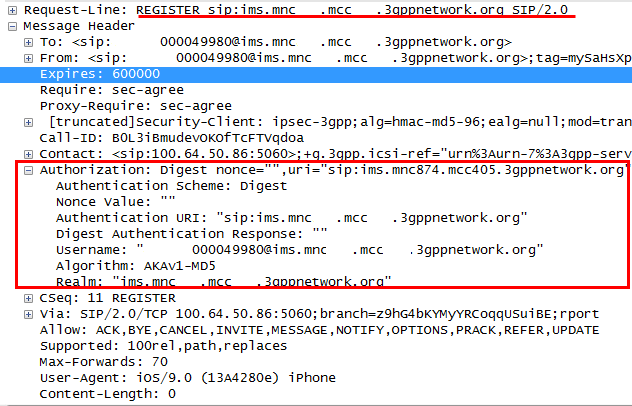 The P-CSCF routes the SIP REGISTER to the I-CSCF as the P-CSCF does not know at this moment as to which S-CSCF is going to serve this UE yet.

[26] Upon receiving the SIP REGISTER, the I-CSCF performs user registration status query by sending User-Authorization-Request (UAR) to the HSS.
The following snapshot shows an example of UAR. 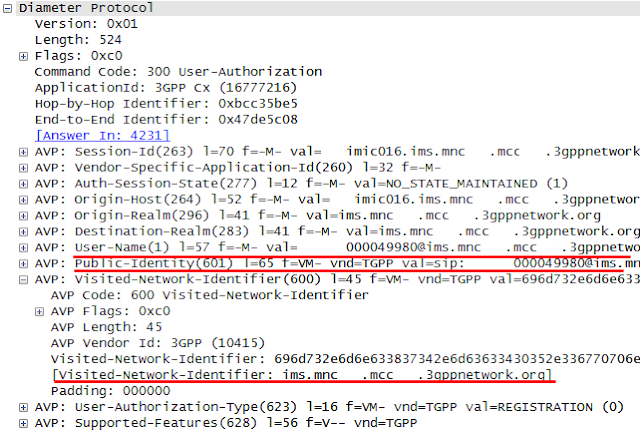 [27] The HSS authorizes the user for IMS service (i.e., verifying the user’s IMPI and IMPU) and if successful, returns with the S-CSCF address for this user in the response, User-Authorization-Answer (UAA).
The following snapshot shows the case where there is already assigned S-CSCF for the user, in which case the I-CSCF does not have to assign a new S-CSCF. If there is no assigned S-CSCF for the subscriber, the HSS returns a set of S-CSCF capabilities and the I-CSCF shall assign a new one based on the received capabilities. 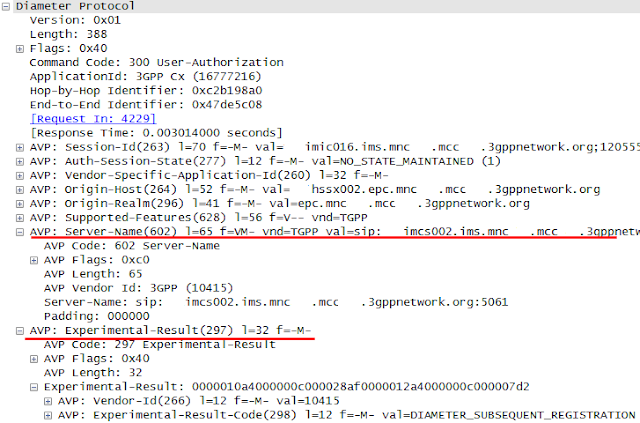 [28] The I-CSCF forwards the SIP REGISTER towards the indicated S-CSCF.

[29] The S-CSCF sends the Multimedia-Auth-Request (MAR) to the HSS requesting the authentication information. 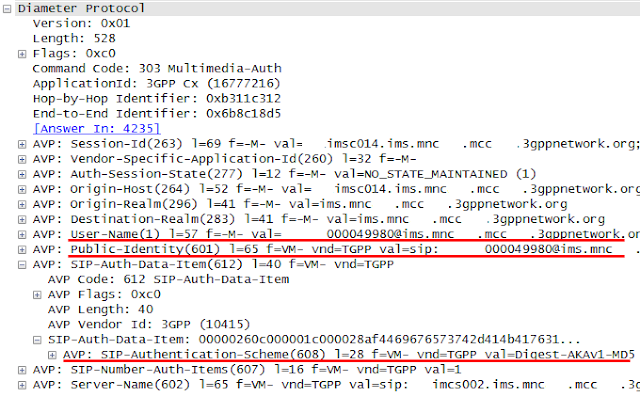 [30] The HSS responds with the Multimedia-Auth-Answer (MAA) containing the authentication information. 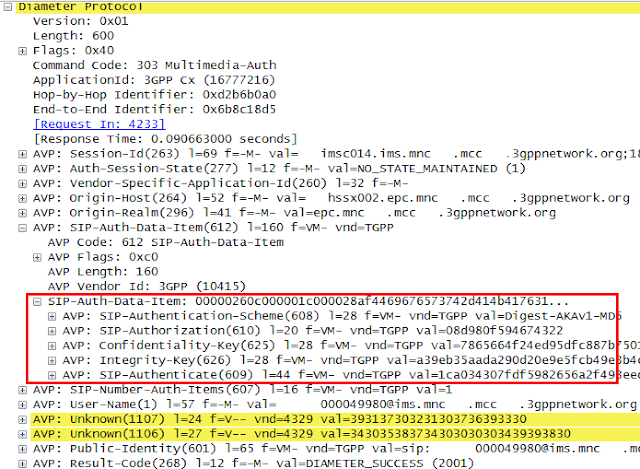 [32] The P-CSCF responds with the 401 UnAuorized towards the UE. The WWW-Authenticate header includes nonce value. The IK and CK is stored in the P-CSCF and removed from the WWW-Authenticate header. As the UE and the P-CSCF negotiated the security method to use IPsec during the initial SIP registration, the subsequent registration and the call related signals like INVITE, 200 OK, PRACK, BYE, etc. are secured based on IPsec.
NOTE In this field test, the SBC takes over security functions of P-CSCF. Therefore the security negotiation and maintaining security parameters like IK and CK are done by the SBC.

Upon receiving the 401 UnAuthorized, the UE extracts the MAC and the SQN from the AUTN, calculates its own XMAC and checks if the XMAC is the same as the received MAC and if the SQN is in a correct range, thereby the UE authenticates the server. The UE also obtains the RES, IK and CK as a result of running the authentication algorithm.

[33] The UE sends the subsequent SIP REGISTER towards the P-CSCF and the P-CSCF to the I-CSCF. 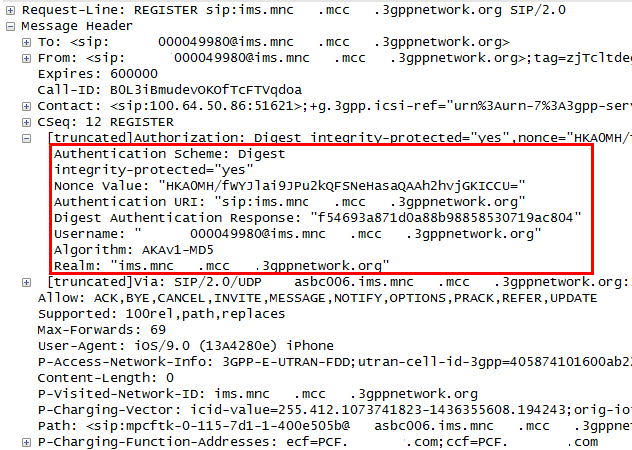 NOTE the above snapshot has been captured between SBC and P-CSCF as the packet on SGi/Gm interface has been secured using IPsec as a result of security negotiation and it couldn’t be decoded by the wireshark in this test. In order to complete the security negotiation, the UE must have included the Security-Verify header in the subsequent REGISTER indicating IPsec, which is not shown in this snapshot as the SBC removes the header before forwarding the message to the IMS core.

[34] Upon receiving the SIP REGISTER, the I-CSCF performs user registration status query by sending User-Authorization-Request (UAR) to the HSS. 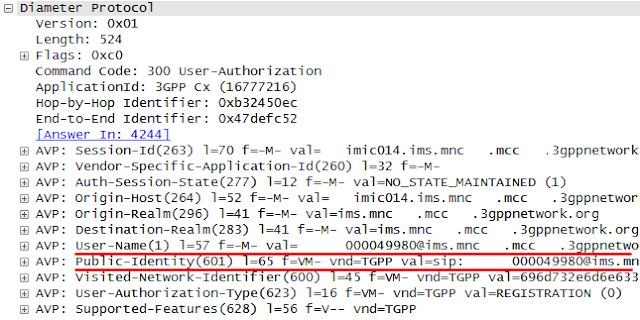 [35] The HSS authorizes the user for IMS service (i.e., verifying the user’s IMPI and IMPU) and if successful, returns with the S-CSCF address for this user in the response, User-Authorization-Answer (UAA). 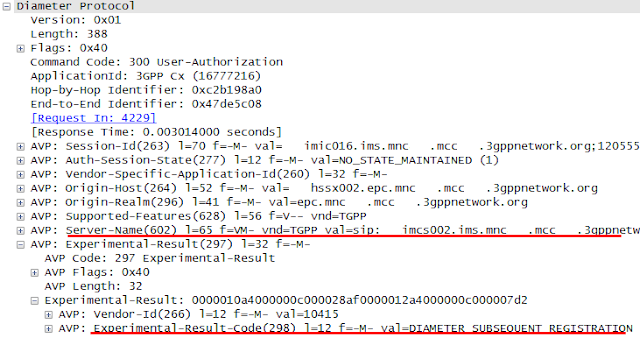 [36] The I-CSCF forwards the SIP REGISTER towards the indicated S-CSCF. Upon receiving the subsequent SIP REGISTER, the S-CSCF compares the stored XRES with the received RES (i.e., Digest Authentication response parameter). If they are identical and successfully authenticated, the public user identity is registered in the S-CSCF.

[37] The S-CSCF informs the HSS that the user has been registered by sending Server Assignment Request (SAR). Upon receiving the SAR, the HSS stores the mapping relation between the S-CSCF and the corresponding IMS subscriber.

[38] The HSS responds with the Server Assignment Answer (SAA) to the S-CSCF. As it was indicated in the SAR that the S-CSCF does not have user profile, the HSS includes the User-Data AVP in the response. 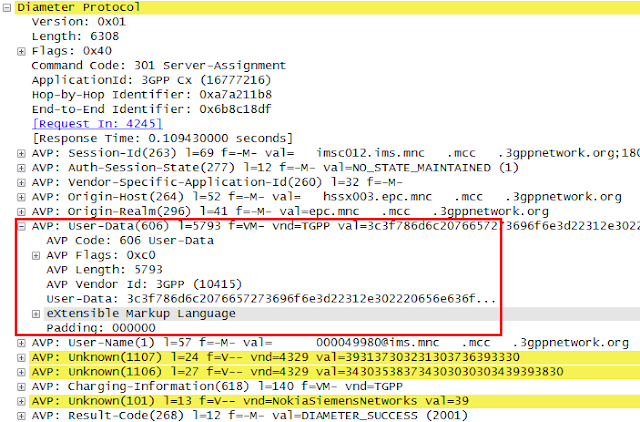 The User-Data AVP may contain the following items as is shown below: 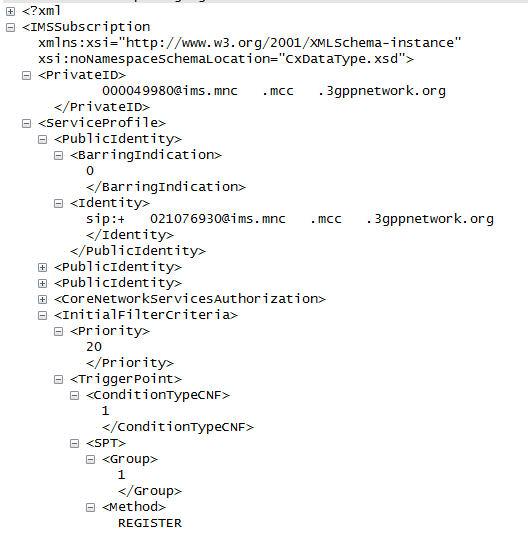 [39] The 200 OK for the SIP REGISTER is sent back towards the UE following the reverse signaling path.

NOTE the above message has been captured on the interface between SBC and P-CSCF as the 200 OK on SGi/Gm interface has been secured using IPsec.

After successful IMS registration, the UE subscribes to the reg event package for the public user identity registered at the S-CSCF. The UE will get notified of a registration status of public identities belonging to the same user. 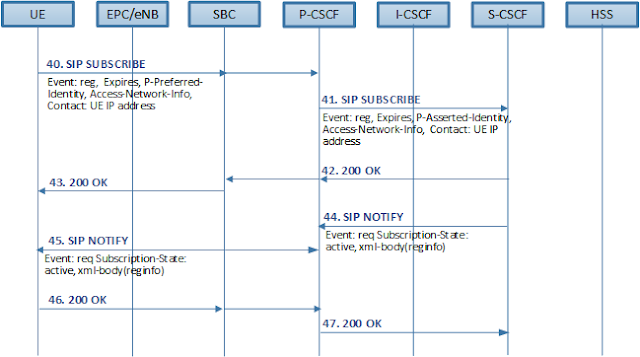 [40] The UE subscribes to the reg event package by sending SIP SUBSCRIBE towards the S-CSCF. 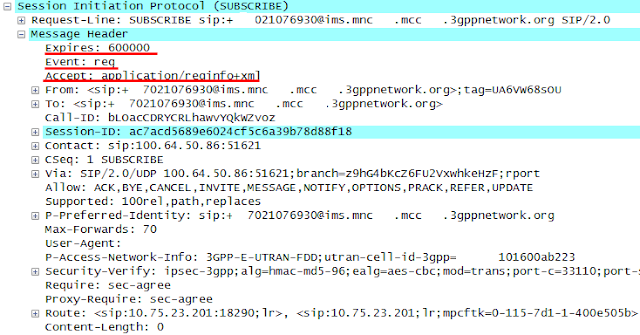 [41] The P-CSCF forwards the SIP SUBSRIBE to the S-CSCF which is known to P-CSCF during the registration procedure. 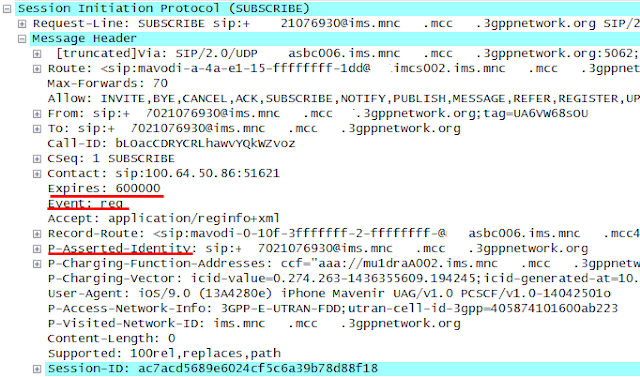 [42-43] The S-CSCF returns with the 200 OK response and it is forwarded to the UE following the signaling path.

[44-45] The S-CSCF notifies the UE of its current registration status by sending SIP NOTIFY, which is forwarded to the UE 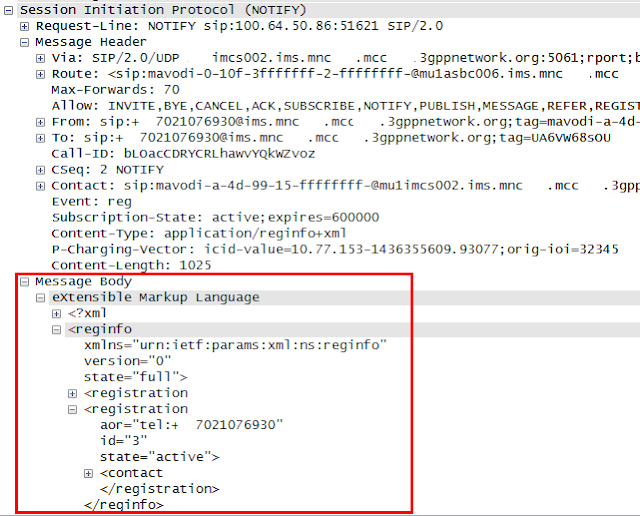